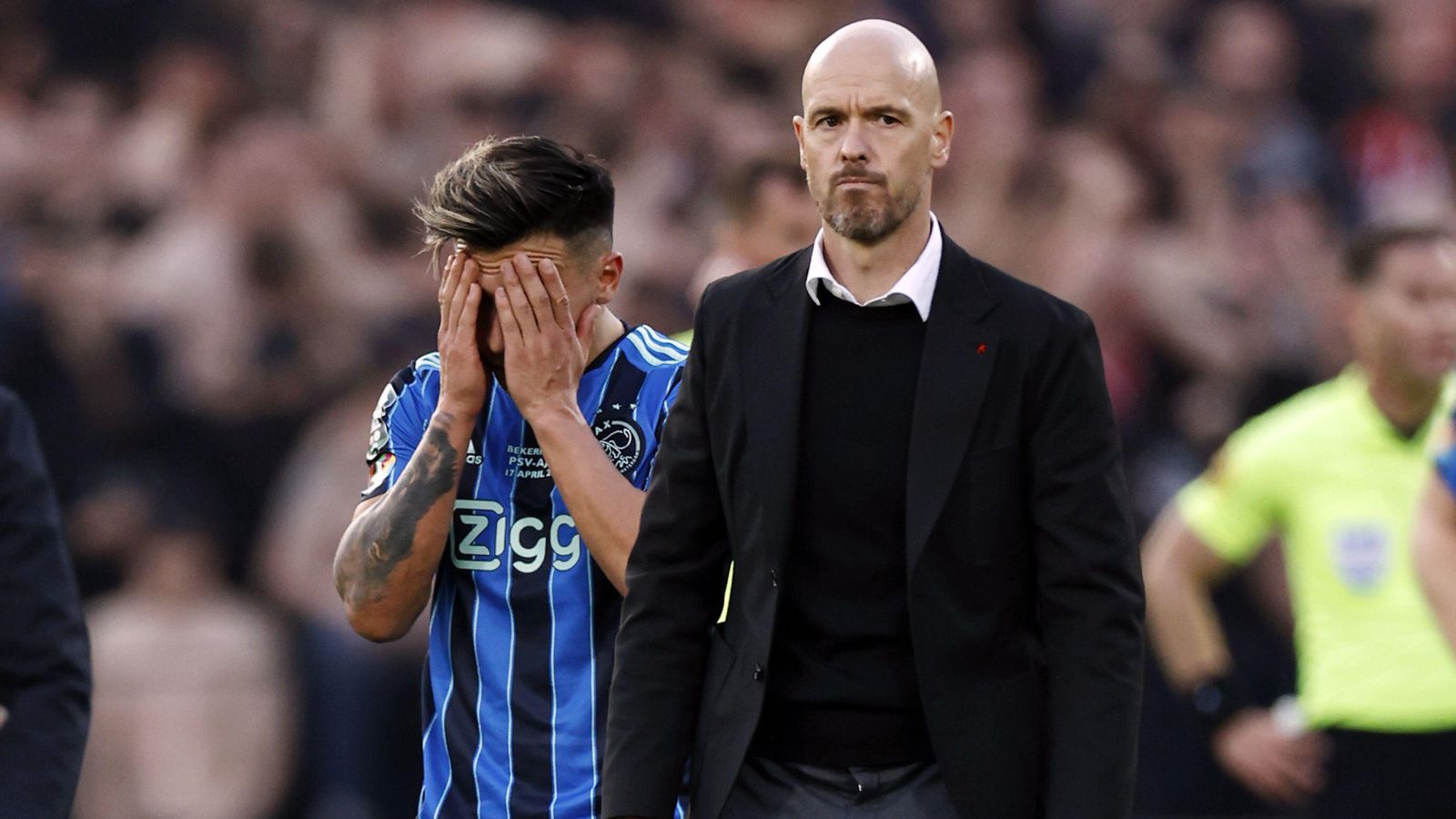 Erik ten Hag called time on an Ajax press conference following a question about potentially taking over at Man Utd next season.

Widespread reports have indicated that the Dutchman has accepted an offer from the Red Devils to become their new permanent manager at the end of the campaign.

Ten Hag has reportedly beaten off competition from Mauricio Pochettino, Julen Lopetegui and Luis Enrique to land the job.

However, it hasn’t been officially confirmed yet and Ten Hag still has important business to attend to as Ajax look to win the Eredvisie title.

One trophy he won’t be winning this season is the Dutch Cup after Ajax lost 2-1 to PSV in the final on Sunday despite taking an early lead.

Erick Gutierrez and Cody Gakpo cancelled out Ryan Gravenberch’s 23rd-minute opener for Ajax and Ten Hag was in no mood to talk about his possible appointment as Man Utd boss in the aftermath.

When asked about the Man Utd job, Ten Hag said: “I am at the service of Ajax and will answer questions only about that. I am not afraid (to talk about United), but please if you have questions about Ajax or the KNVB Beker I will answer. I will not talk about the future.

He then said: “I think this is the time to end the press conference. I will need 24 hours to recover from this.”

Current mood, but we’ll be back. pic.twitter.com/USZgyIpHJa

But Ajax technical manager Gerry Hamstra was happy to speak of the interest from Man Utd and insisted that he still had hope that Ten Hag would remain in the Netherlands.

Hamstra said: “We hope he stays, but there are now only two scenarios. Our job is to stick to the facts and he’s not left yet.

“He is focused on the present. Only Erik can determine his future. He is old enough and wise enough for that.

“We really hope he stays, and if he does not stay we have to be ready for the second scenario.”

On his side’s performance in their loss to PSV, Ten Hag had earlier said: “We made two big mistakes at the beginning of the second half. We let them counter from one of our attacks and win a free-kick, and then it was 1-1. And we needed to keep Gakpo out wide on the left, and instead he cut inside and scored.”