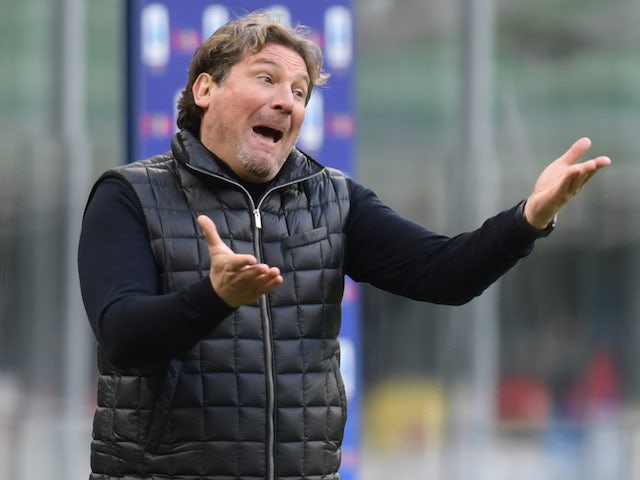 Separated by just one goal after the first leg in midweek, promotion rivals Pisa and Monza reconvene on Saturday, with a place in Serie A at stake.

The second leg of the Serie B playoff final takes place at Arena Garibaldi, where the hosts seek to overcome their slim deficit; reduced by a last-gasp strike on Thursday.

Should Pisa ultimately seal a return to the Italian top flight this weekend, after over 30 years away, they may have cause to reflect on a potential turning point at the death of their semi-final first leg.

With the clock ticking down towards a 2-0 defeat at Stadio Brianteo, the Nerazzurri struck back through Filippo Berra‘s stoppage-time header – halving the size of their task in Saturday’s decisive return.

After they finished the regular season third in the Serie B standings, just two points behind promoted Cremonese in second, the Tuscan outfit were consigned to the nail-biting process of the playoffs; requiring them to negotiate four games successfully for a place in Serie A.

They subsequently came through their semi-final with Benevento, in which the two-legged tie ended 1-1 on aggregate – they progressed to the final due to a higher league finish – and despite Thursday’s defeat, are now 90 minutes away from being back in the big time.

Though the away goals rule no longer applies, Pisa hold an important advantage over their fellow finalists this weekend, as they finished above Monza in the table, based on the clubs’ head-to-head record. That means any win would send them up.

The hosts have, however, lost half of their six most recent matches, and face opponents who have won four of their last five, except – crucially – a defeat to Perugia on the final day of the regular season, which deprived them of automatic promotion.

Monza may also have reason to regret their failure to close out a two-goal victory in midweek, after goals from forward pair Christian Gytkjaer and Dany Mota seemingly put them within touching distance of reaching Serie A for the very first time.

The Biancorossi’s ownership duo of Silvio Berlusconi and Adriano Galliani – one of the most successful pairings in Italian history, having previously dominated Calcio with Milan – will not settle for anything less than top-flight football. Even more so, after continued investment followed their loss to Cittadella in last year’s semi-finals.

At that stage this time around, Giovanni Stroppa‘s men managed to traverse a tricky tie against Lombardy rivals Brescia, who they beat 4-2 on aggregate last week.

Following their first-leg victory on Thursday, Monza finished off the 2021-22 campaign with an eight-game unbeaten run on home soil, including six wins. However, they must now come away from Pisa without suffering defeat – something they failed to do on their last visit to Arena Garibaldi in September.

As any loss this time would ensure their long wait for Serie A status continues at least 12 more months, the stakes are incredibly high for a team aspiring to seal their place in club history.

Though several players on either side were at risk of suspension – facing a ban if they had picked up a booking in Thursday’s first leg – no yellow cards were shown at Stadio Brianteo, so both teams could potentially remain unchanged.

Once again, Pisa captain Antonio Caracciolo will be unavailable on Saturday evening, with the former Brescia defender’s season already ended due to a serious knee injury. Iceland international Hjortur Hermannsson should therefore join Maxime Leverbe in central defence, while there are a variety of options open to coach Luca D’Angelo in attack.

Sampdoria loanee Ernesto Torregrossa is pushing for a start, after appearing as a substitute in the first leg, but George Puscas and Lorenzo Lucca appear to be the favoured front pairing, with Giuseppe Sibilli also likely to feature at some stage.

Meanwhile, experienced defensive duo Gabriel Paletta and Guilio Donati could come into contention for the away side, as Monza may make changes to their back three.

Giovanni Stroppa will again be without wing-back Pedro Pereira, who sustained an ankle sprain in the semi-finals, so Salvatore Molina is set to retain his place on the right flank.

After scoring a potentially crucial second goal from the bench on Thursday – and making a big impact in the semis – Danish striker Christian Gytkjaer will hope to usurp Patrick Ciurria up front and join Dany Mota in a front two. Promoted with Empoli last year, loanee Leonardo Mancuso is another attacking option available to Stroppa if required.

The hype brought about by Monza’s elevation to the top flight would add a new dimension to the old order in Serie A, and they are now set to reach the promised land after last year’s setback in the semi-finals.

Having proved more potent during the regular season and playoffs, the away side can surely score at least once in Pisa, which would put them within arm’s reach of promotion.

Our expert tipster partners at Sporita.com are predicting under 3.5 goals in this match. Click here to find out what else they are predicting for this game and for more of their tried-and-tested football tips.Under 3.5:data
ID:486900:1false2false3false:QQ:: from db desktop :LenBod:collect11407: