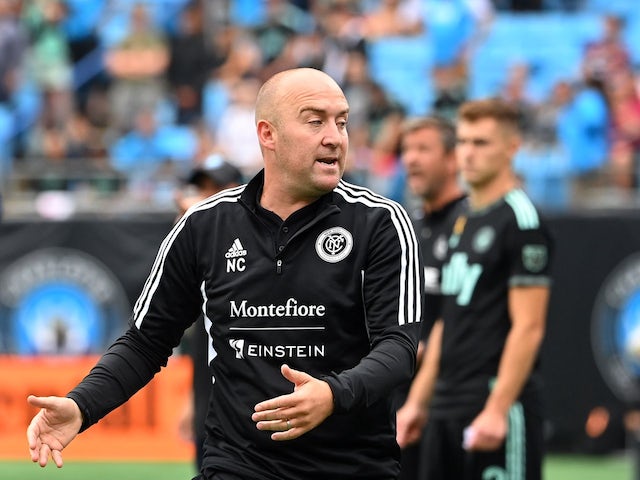 New York City FC have an opportunity to their capture their second MLS regular season series against the New York Red Bulls since 2020 when they host their arch-rivals in the final Hudson River Derby of 2022 on Saturday at Yankee Stadium.

The defending league champions are winless in their previous five domestic encounters, while their opponents from New Jersey have points in five of their last six MLS matches and have clinched a postseason berth for a record 13th consecutive campaign.

Pointing out all of the flaws in the Pigeons’ play domestically is becoming repetitive, as this group have only captured one victory in their last 10 MLS affairs, trailing their New York rivals by four points for third in the Eastern Conference.

In a season which has taken a turn for the worse, Nick Cushing and his side have had a difficult time finding many positives from their performances of late, but there were plenty of encouraging signs in their midweek encounter.

Their Campeones Cup triumph against Liga MX side Atlas may be what this group need to regain some confidence as NYCFC were in control of that game from the opening whistle, taking the lead after four minutes and never looking back, winning by a score of 2-0.

Seeing them with a lead throughout the entire 90 minutes has been rare in the regular season, as the reigning champions have trailed at some point in eight of their last nine MLS matches after going behind only three times in their previous 15 domestic encounters.

It seems as though we have seen two different NYCFC teams show up in these regular season fixtures at home against the Red Bulls.

They lost the first two matches against them at Yankee Stadium by a combined score of 10-1 but followed that up by claiming points in six of their previous seven encounters versus the Red Bulls in the Bronx.

That Jekyll and Hyde form is something that we have seen from this team throughout the campaign, winning only one of their first five regular season encounters this year, then going unbeaten in eight consecutive matches with six straight clean sheets before the departure of Ronny Deila.

Saturday will be the first domestic fixture for the Boys in Blue in the Bronx since July 23, when they defeated Inter Miami 2-0, and NYCFC have never lost at Yankee Stadium since Cushing took charge.

With their first objective of the year fulfilled, clinching another playoff berth, the next goal for Gerhard Struber and his Red Bulls will be to lock up a home playoff game for the first time since 2018.

That could happen as early as this weekend, as a Red Bulls victory combined with a defeat or draw by both FC Cincinnati and Orlando City would guarantee them third place in the Eastern Conference.

Playing away from home never seems to intimidate this team, as they are tied with CF Montreal for the most road victories this year (nine), unbeaten in six consecutive away fixtures.

Defensively, this unit have been a nightmare to break down when playing on the road, conceding a goal or fewer in 11 away matches this season and picking up a clean sheet in two of their previous three games as the visitors.

They have conceded the opening goal in three of their last four domestic fixtures but have still managed to earn points in three of those encounters.

Since May, the Red Bulls have drawn first blood in eight league fixtures, winning seven of those games, with their only blemish over that stretch being a 5-4 defeat to the Colorado Rapids in early August.

Their 50 points gained so far is the best tally for the Red Bulls in a regular-season campaign since capturing the Supporters’ Shield crown in 2018, while a victory this weekend would give them 15 wins in 2022, their best total in four years.

Alexander Callens got the ball rolling for NYCFC on Wednesday, scoring the winner at the Campeones Cup after four minutes of play.

Maxi Moralez padded the lead early in the second half, while Luis Barraza made seven stops as he collected a clean sheet.

Callens and first-choice goalkeeper Sean Johnson have been called up to represent Peru and the USA respectively in the upcoming international window.

Anton Tinnerholm and Alfredo Morales are questionable with lower body injuries, while Vuk Latinovich started for the second time in his last three domestic encounters last weekend, when they were beaten 1-0 by Charlotte FC.

Keaton Parks is looking to make his first start for NYCFC since returning from the injured list versus Cincinnati as he played the final five minutes plus stoppage time at the Campeones Cup in midweek, while Heber picked up a knock versus Atlas and will not be available.

Lewis Morgan notched the winner for the Red Bulls last Saturday, his team-leading 14th of the season, Cristian Casseres put home his second of the campaign and Elias Manoel picked up his first assist since joining them on loan from Gremio.

Steven Sserwadda will be representing Uganda in the upcoming international window, while Aaron Long has been called up to the US national team.

Dru Yearwood remains on the suspended list after kicking the ball into the stands in their 2-0 defeat versus the Philadelphia Union, while Andres Reyes and Patryk Klimala are questionable with ankle injuries.

Zach Ryan will be out with a sore shoulder, Serge Ngoma has a strained hamstring and Cameron Harper is still dealing with a quad injury.

Momentum may not be on the side of the reigning MLS champs right now in the domestic campaign, but it looked like they gained a lot of confidence from their Campeones Cup triumph in midweek, and we believe they will be able to carry that form into this weekend.

After clinching a playoff berth, we expect the Red Bulls might be a little complacent in this one, knowing that they have some breathing room in the Eastern Conference table.

Our expert tipster partners at Sporita.com are predicting under 3.5 goals in this match. Click here to find out what else they are predicting for this game and for more of their tried-and-tested football tips.Under 3.5:curl
ID:494748:1false2false3false:QQ:: from db desktop :LenBod:collect13961: