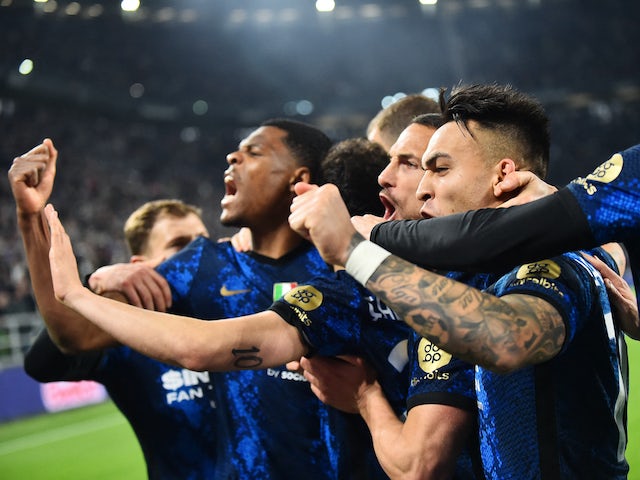 Separated by just two points in the Serie A standings, Inter Milan and title rivals AC Milan meet at San Siro on Tuesday, as they contest the second leg of their Coppa Italia semi-final.

After the teams’ first encounter ended goalless last month, the 27th Derby della Madonnina in Coppa history will decide which Milanese giant meets either Fiorentina or Juventus in the final.

With the overall ledger seeing Milan remain in front by 10 wins to eight following last month’s drab 0-0 draw in the first leg, the balance between these powerhouses of Calcio is finely poised – though Inter have previously lifted the Coppa Italia on seven occasions to the Rossoneri’s five.

Following their quarter-final victory last year, under former coach Antonio Conte, the Nerazzurri then went on to claim the Scudetto ahead of their fiercest foes, and this term the pair have stayed locked in battle for the major prizes.

Milan emerged on top in the sides’ last league meeting – a 2-1 comeback win in February, when Olivier Giroud denied Inter by bagging a late brace – and they are still marginally ahead in the pecking order after the events of Good Friday.

Though Inter took care of Spezia at Stadio Alberto Picco in the earlier kickoff, with midfield maestro Marcelo Brozovic finally scoring his first league goal of the season, Milan soon responded with a win of their own to reclaim the Serie A summit.

Simone Inzaghi‘s side still have a game in hand on their fellow Scudetto hopefuls, though, and could yet go one better than last year’s long-awaited championship triumph by now claiming a domestic double – but only if they can first push past their Rossonero rivals.

Thoughts of the title race are momentarily on hold, then, as cup glory takes precedence, and ending a long barren spell for Italy’s second city in the competition will be upmost in both clubs’ minds.

While Inter – who next face quarter-final victims Roma in Serie A – have not lifted the cup for over a decade, Milan’s drought goes back further: to 2003.

The dreary Milan Derby served up in March puts Tuesday’s ‘visitors’ at a slight advantage, as they seek a first Coppa Italia triumph since the days of Andriy Shevchenko and Rivaldo.

As the semis are the only stage of the competition to be played over two legs, and the away goals rule is not phased out until next season, each goal will count double for Milan in the event of a draw.

The five-times cup winners have lost only two of their last 19 home games in the Coppa, and though classed as the away team at San Siro this week, such a record should embolden Stefano Pioli‘s side, who cruised through to this stage by beating Genoa and Lazio.

Still without the talismanic presence of ex-Inter star Zlatan Ibrahimovic up front, the Rossoneri recently stumbled to successive goalless draws against Bologna and Torino, but were able to edge past struggling Genoa on Friday – if not in particularly convincing fashion.

Only a late strike from substitute Junior Messias wrapped up the points for the side chasing the club’s first title since 2011, after the impressive Rafael Leao had opened the scoring early on.

Facing a tough trip to Lazio at the weekend, Milan have the perhaps the trickiest run-in of all the Scudetto contenders – with Napoli joining Inter in hot pursuit – but before they resume Serie A duty on Sunday, they must first aim to extend a 13-game unbeaten run and book a place in next month’s final.

After scoring as a second-half substitute on Friday, the return of Lautaro Martinez to the Inter starting XI could be the only change coach Simone Inzaghi makes for the Derby. The Argentina international is set to replace compatriot Joaquin Correa up front and will most likely reprise his partnership with veteran striker Edin Dzeko.

Another former regular, Dutch defender Stefan de Vrij, is also a candidate to be drafted into the side, with the place of Danilo D’Ambrosio being in jeopardy as a result. Meanwhile, fellow centre-back Alessandro Bastoni should be fit to feature despite being withdrawn early against Spezia.

Meanwhile, Stefano Pioli has a number of selection issues to resolve ahead of this latest encounter with his former club, as in addition to experienced campaigners Zlatan Ibrahimovic, Simon Kjaer and Alessio Romagnoli – all of whom are sidelined – Davide Calabria has yet to return to full training since pulling out pre-kickoff on Friday.

The full-back was unable to take his place in the Milan defence against Genoa due to illness, and as his deputy Alessandro Florenzi remains out of action, Pierre Kalulu may once again have to switch across from the centre; disrupting his promising partnership with Fikayo Tomori. In that instance, Matteo Gabbia would also start.

Still the Coppa Italia’s joint-top scorer this season (with three goals) despite drawing a blank in the first leg, Olivier Giroud should lead the line in Ibrahimovic’s ongoing absence.

Ante Rebic and Junior Messias are pushing for places in the French forward’s supporting cast, while Sandro Tonali can feature in midfield after missing last month’s match through suspension.

While the away goals rule could play a role in how both sides approach this game – Milan may be happy to sit in and try to strike a blow on the counter – the greater goal threat that Inter pose is set to see them through to the final.

A number of options in attack, by contrast with their rivals’ recent troubles in that department, may ultimately decide the destiny of this semi-final contest in the Nerazzurri’s favour.

Our expert tipster partners at Sporita.com are predicting over 1.5 goals in this match. Click here to find out what else they are predicting for this game and for more of their tried-and-tested football tips.Over 1.5:data
ID:483578:1false2false3false:QQ:: from db desktop :LenBod:collect14143: