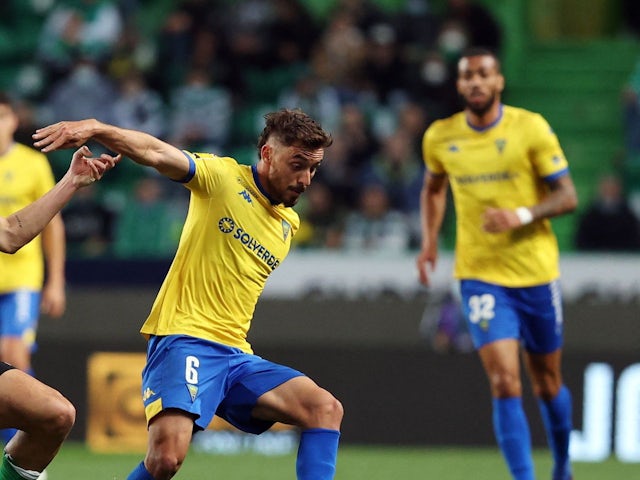 Fresh off the back of crashing out of the Europa League, Braga return to the Primeira Liga where they visit the Estadio Antonio Coimbra da Mota to face Estoril Praia on Monday.

The Canarinhos will head into the game seeking to get one over the visitors, having failed to taste victory in any of the last seven meetings between the sides since 2015.

Estoril Praia were left empty handed yet again in the Primeira Liga when they fell to a 2-0 defeat at the hands of Santa Clara at the Estadio de Sao Miguel last Sunday.

Brazilian forward Ricardinho broke the deadlock on the stroke of half time before FC Tokyo loanee Kyosuke Tagawa made sure of the result with a 53rd minute strike.

Bruno Pinheiro‘s men head into Monday’s game on a run of three consecutive defeats, scoring twice and conceding six goals in that time, while they have managed just one win from their last seven outings.

This slump in form has seen Estoril Praia drop to 10th place in the Primeira Liga standings as they have won eight, drawn 10 and lost 11 of their 29 games to collect 34 points so far this season.

While they could rise to seventh place with all three points on Monday, next up is an opposing side who they have failed to beat in seven straight attempts, claiming one draw and losing six games since a 1-0 victory back in 2015.

Elsewhere, Braga were sent packing from the Europa League last Thursday when they were beaten 3-1 by a spirited Rangers side at the Ibrox Stadium in the second leg of their quarter-finals clash.

Having lost 1-0 in last week’s reverse leg, James Tavernier struck twice in the first half to hand the hosts an aggregate lead, and after David Carmo scored in the 83rd minute to force extra time, Kemar Roofe netted a 101st-minute winner to send the Scottish side through to the semi-finals.

Braga now turn their attention to the Primeira Liga, where they are currently on a three-game winning streak, seeing off Vizela 1-0 most recently on April 10 courtesy of Iuri Medeiros‘s 39th-minute strike.

Carlos Carvalhal‘s men are now unbeaten in all but one of their last seven away games in the league — picking up five wins and one draw — with February’s 2-1 defeat at Vitoria de Guimaraes being the only exception.

With 55 points from 29 games, Os Arcebispos are currently fourth in the league standings, eight points above Gil Vicente in the final Conference League qualification spot.

Estoril Praia will take to the pitch without the services of Brazilian defender Lucas Africo, who has been out of action since last November through a knee problem.

He is joined on the Canarinhos’ injury table by Ruben Providence as the 20-year-old continues his long road to full fitness after suffering a severe injury last April.

Meanwhile, Braga will be without the services of Portuguese forward Vitor Tormena after the 22-year-old received his marching orders in the game against Vizela last Sunday.

While Medeiros has a pending European suspension following his red against Rangers on Thursday, he is eligible to feature domestically and we expect the 27-year-old, who has registered seven goals and six assists this season, to spearhead the attack.

On the injury front, Carvalhal will be unable to call upon the services of the Portuguese duo of Roger Fernandes and Nuno Sequeira, who are recuperating from muscle and knee problems respectively.

Following their Europa League exit, Braga will seek to restore some pride on Monday as they face a floundering Estoril Praia side. Looking at the gulf in class and quality between the two sides, we are tipping the visitors to come away victorious on Monday.

Our expert tipster partners at Sporita.com are predicting over 1.5 goals in this match. Click here to find out what else they are predicting for this game and for more of their tried-and-tested football tips.Over 1.5:data
ID:483495:1false2false3false:QQ:: from db desktop :LenBod:collect10388: