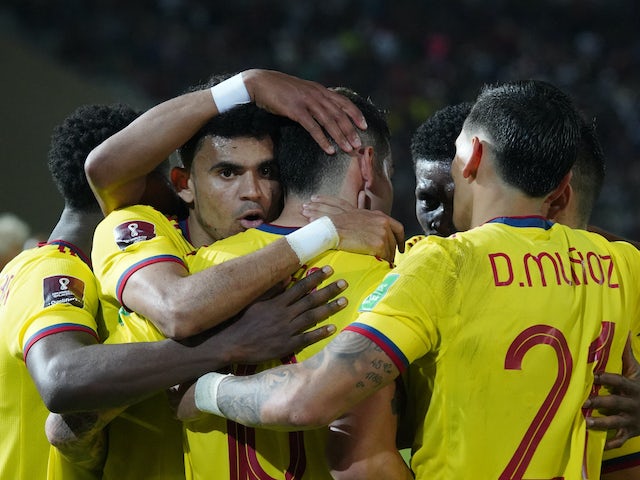 For the first time in over nine years, Colombia and Guatemala will face each other in an international friendly on Saturday at Red Bull Arena in New Jersey.

Los Cafeteros came up just short in their bid to qualify for a third successive World Cup, finishing a point behind Peru for an inter-confederation playoff berth, while the Guatemalans failed to make it beyond the opening round of CONCACAF qualification, as they wound up second behind Curacao.

Despite a solid finish to CONMEBOL qualifying, ultimately, inconsistencies and a failure to step up in big moments proved to be the undoing of the Colombians, who will not be participating at the finals for the first time since 2010.

Had they been able to hang onto a 0-0 result on Matchday 15 against Peru, their World Cup journey could still be alive as they conceded an 85th-minute tally to Edison Flores, losing 1-0, finishing a point behind the Peruvians in the table, when they had the edge in goal difference.

Colombia failed to score on eight occasions in 2022 qualifying, while netting the fewest goals in a qualification cycle (20) since their failed 2010 campaign when they managed only 14 tallies.

Nestor Lorenzo takes over a side who are full of experience but may have already peaked, according to numerous experts.

He will be tasked with reinvigorating this group ahead of the 2024 Copa America and developing the next generation of Colombian players.

Colombia were not as sharp in the attacking third during the 2022 qualification campaign, but they have played well defensively of late, posting three successive clean sheets heading into this encounter.

It was another case of close but no cigar for Guatemala in 2022 CONCACAF qualifying, as they were eliminated in the group stage for a second successive campaign.

In the 2018 qualification cycle, they were knocked out by a single point, and in their quest for Qatar, that margin was even thinner as one more goal would have put them ahead of Curacao and into the second phase of qualifying.

For a long time, Los Mayas have been a side that focuses on defending first and foremost as manager Luis Fernando Tena often has them set up in a low block system, hanging back with numerous players behind the ball.

The tactical approach of the former Mexican men’s under-23 coach, who led El Tri to a gold medal at the 2012 Olympics, will not win him many fans that love free-flowing attacking football, but this team are as disciplined and stubborn in their setup as perhaps any side in CONCACAF.

That discipline and passive approach has enabled them to post five clean sheets in their eight matches this year, including holding the Mexicans to a 0-0 draw back in April.

Saturday will be just the seventh meeting all-time between themselves and Colombia, who they have not beaten in an international fixture since a 2-0 triumph in 1968.

Rafael Santos Borre, who scored the winning penalty for his club side Eintracht Frankfurt in their Europa League triumph last season, had the only goal for Colombia in their previous match, a 1-0 victory over Saudi Arabia.

Hull City striker Oscar Estupinan made his international debut in that encounter, replacing Eder Balanta as a second-half substitute.

The Colombian record goalscorer and captain Radamel Falcao has an opportunity to reach the century mark for international appearances this weekend.

2014 World Cup Golden Boot winner James Rodriguez can move into a tie for second all-time in goals for los Cafeteros, currently trailing Arnoldo Iguaran by one.

Juventus midfielder Juan Cuadrado has a chance to surpass the legendary Carlos Valderrama for second in all-time appearances for Colombia should he feature on Saturday.

Luis Diaz is tied with Roberto Firmino for the lead in goals for Liverpool this season, tallying three so far in this Premier League campaign, while Jhon Duran and Jorge Carrascal are looking to collect their first caps for the senior squad and Tottenham centre-back Davinson Sanchez has a chance to pick up his 50th international cap.

Real Salt Lake striker Rubio Rubin had a brace for Guatemala in a 2-0 victory versus the Dominican Republic in CONCACAF Nations League play last June, Ricardo Jerez has two clean sheets so far in the group stage of that competition, while Oscar Santis and Carlos Mejia have also tallied for them at that tournament.

Jose Ardon made his debut for Guatemala in their opening match at the Nations League, when they were beaten 2-0 by French Guiana.

Rudy Barrientos needs two more caps to reach 20 for his international career, while Andres Lezcano, who helped his club side Comunicaciones capture the Guatemalan league title last season, is still searching for his first international goal.

Robin Betancourth began their previous encounter on the bench, and Lynner Garcia came on as a substitute for a second successive encounter, taking the place of Santis for the final nine minutes plus stoppage time against the Dominican Republic back in June.

As patient and committed as the Guatemalans have been, we feel that they will be outclassed by an experienced Colombian side, who have been just as stingy on the back end of late while boasting a lot more quality than their opponents in the final third.

Our expert tipster partners at Sporita.com are predicting over 1.5 goals in this match. Click here to find out what else they are predicting for this game and for more of their tried-and-tested football tips.Over 1.5:data
ID:495125:1false2false3false:QQ:: from db desktop :LenBod:collect17191: