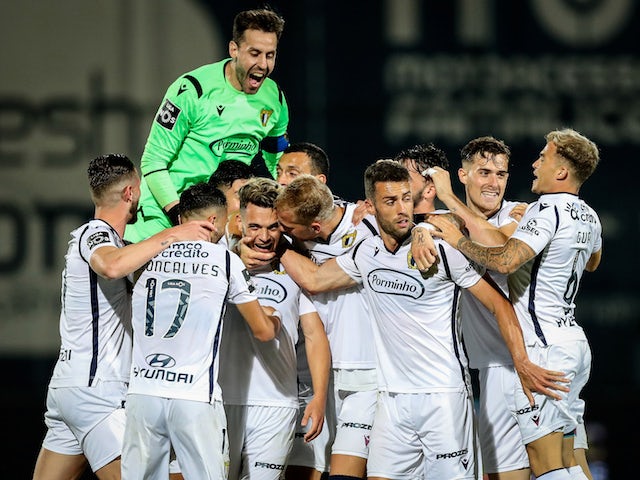 Seeking to snap their run of two consecutive defeats, Famalicao take a trip to the National Sports Center of Jamor to face Casa Pia in round seven of the Primeira Liga on Sunday.

The newly-promoted side, on the other hand, head into the weekend unbeaten in their last four outings and will look to keep the juggernaut rolling.

Casa Pia returned to winning ways in style as they saw off league strugglers Pacos de Ferreira 3-2 when the sides squared off at the Capital do Movel Municipal Stadium last Sunday.

After trailing at half time courtesy of Adrian Butzke‘s 17th-minute opener, Savior Godwin, Neto and Clayton scored three unteplied goals in a 16-minute spell to turn the game on its head before Butzke netted in the 96th minute to half the deficit.

Filipe Martins‘s men previously picked up successive victories over Boavista and Vitoria de Guimaraes in their final two games in August before playing out an uneventful goalless draw with Arouca on September 4.

Casa Pia have now picked up three wins, two draws and lost one of their opening six games of the season to collect 11 points and sit sixth in the Primeira Liga standings, but could move into the top four with all three points this weekend.

The Lisbon outfit, who secured promotion to the top flight after finishing second in the Segunda Liga last term, head into Sunday unbeaten in 11 of their 13 competitive home games in 2022, claiming nine wins and two draws.

Elsewhere, Famalicao failed to find their feet as they were condemned to a 1-0 defeat by high-flying Benfica when the side squared off at the Estadio Municipal de Famalicao last weekend.

In a game where Ivo Rodrigues received his marching orders, Alejandro Grimaldo teed up Portuguese international Rafa Silva, who tucked home his third goal of the season three minutes after the hour mark to hand Ae Aguias all three points.

Prior to that, Famalicao picked up their first victory of the season when they edged out Santa Clara 1-0 on September 28 before visiting the Estadio Municipal de Portimao, where they fell to a 1-0 loss against Portimonense one week later.

With just four points from their opening six games, Rui Silva‘s men are currently 16th in the league standings, level on points with 15th-placed Santa Clara.

While the Vila Nova will be looking to get their campaign up and running this weekend, they have failed to taste victory away from home this season and have managed just one win in their last eight outings since the start of March.

Casa Pia will take to the pitch without the services of 31-year-old forward Carnejy Antoine, who is yet to feature in this campaign after picking up an injury in pre-season.

Clayton started off the bench against Pacos de Ferreira last time out, but following his impactful cameo, the Brazilian forward will push for his first start of the season, potentially coming in for 33-year-old Rafael Martins.

Former Panathinaikos full-back Joao Nunes was an absentee in the aforementioned game, but the 26-year-old should make the matchday squad this weekend.

Famalicao, on the other hand, will be without 27-year-old midfielder Rodrigues, who is currently suspended after picking up a straight red late in the game against Benfica last weekend.

On the injury front, Silva will be unable to call upon Spanish midfielder Ivan Jaime, who has been out of action since January, when he sustained a ruptured cruciate ligament.

Casa Pia have kicked off their top-flight campaign on a solid note and head into the weekend as slight favourites to claim the desired results. Martin’s side take on a Famalicao side who have struggled to grind out results on the road and we predict they will come away with all three points.

Our expert tipster partners at Sporita.com are predicting over 1.5 goals in this match. Click here to find out what else they are predicting for this game and for more of their tried-and-tested football tips.Over 1.5:data
ID:494847:1false2false3false:QQ:: from db desktop :LenBod:collect10000: