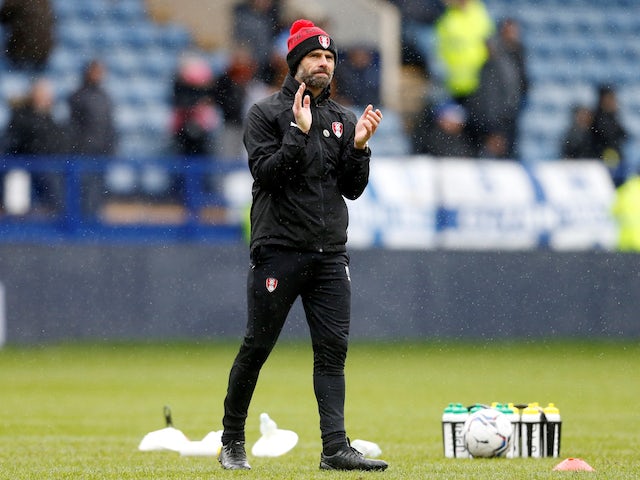 With four games left to play in the race for promotion, Rotherham United will look to strengthen their place in the top two of the League One table on Tuesday, when they travel to take on Burton Albion.

The Millers jumped back above MK Dons with a win at the weekend, and lead the third-placed side on goal difference with a game in hand.

Having comfortably avoided the battle for survival throughout the season, Burton Albion instead found themselves in a fight for a top-half finish in League One.

They have fallen away in that pursuit, though, winning just one of their last 11 games – a narrow victory over strugglers Fleetwood Town after three straight defeats.

While they should not be disheartened by those results, the Brewers do now sit 16th in the third tier, and they will aim to boost their claim for a higher mid-table finish in what will be a tough test against the promotion-chasing visitors.

Sitting atop the League One table with 75 points from 34 matches, Rotherham United once again looked set to cruise to an immediate promotion back to the Championship.

However, Paul Warne‘s men have since hit a tougher patch to put their top-two status in doubt, winning just two of their last eight league outings and only collecting eight points in the process.

While they were eventually able to topple Sutton United after extra time and secure silverware in the EFL Trophy final, the Millers went on to lose back-to-back third-tier games at the hands of Charlton Athletic and Portsmouth to briefly drop behind MK Dons and out of the automatic promotion places.

The South Yorkshire outfit were able to make a crucial return to winning ways at the weekend, though, beating playoff-chasing Ipswich Town 1-0 thanks to Michael Smith‘s 78th-minute winner, which, combined with MK Dons’ defeat on Saturday, fired the Millers back into the top two.

While they now lead the third-placed side on goal difference with a game in hand, Rotherham will know they have lots more work to do in their final four matches to seal promotion, and they will be desperate to record a second straight win on Tuesday.

Having at least earned some commendable draws recently, Burton Albion are unlikely to make too many changes, with Adedeji Oshilaja, John Brayford and Sam Hughes again set to form the back three.

They boast plenty of experience further forward, too, and former Everton striker Oumar Niasse should continue to lead the line alongside Harry Chapman with support from Josh Powell.

In the absence of veteran midfielder Adlene Guediora, who hit two goals in his first three appearances for the club in March, Michael Mancienne should again partner up with former Manchester United man Cameron Borthwick-Jackson in the engine room.

While Rotherham striker Will Grigg remains out through injury, Michael Smith continues to be the key man going forward, having taken his tally to 17 league goals for the season last time out.

With Freddie Ladapo‘s appearances limited recently, Smith should again be joined by Chiedozie Ogbene in attack.

Richard Wood is set to come back into the back three, while Dan Barlaser is vying to return to the midfield unit, with Ben Wiles and Jamie Lindsay expected to keep their places.

With far more to play for and with boosted confidence from Friday’s vital win, we see Rotherham remaining in the top two with a win on Tuesday.

Warne’s men will know they have no room for error and should have what it takes to return to the New York Stadium with all three points.

Our expert tipster partners at Sporita.com are predicting over 1.5 goals in this match. Click here to find out what else they are predicting for this game and for more of their tried-and-tested football tips.Over 1.5:data
ID:483550:1false2false3false:QQ:: from db desktop :LenBod:collect11376: