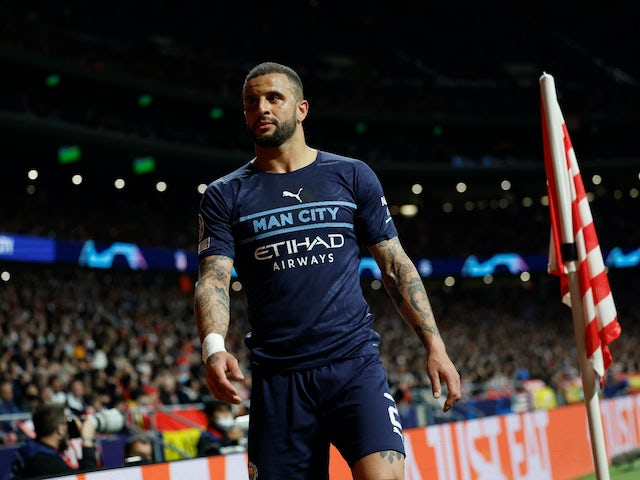 Manchester City are unlikely to start contract talks with Kyle Walker until next year, according to a report.

Manchester City are reportedly not expected to open contract talks with Kyle Walker until next year.

The 32-year-old joined the Citizens from Tottenham Hotspur in July 2017 and has been an important player for the English champions, featuring on 222 occasions, contributing six goals and 17 assists in the process.

Walker has won four Premier League titles, one FA Cup and four EFL Cup crowns during his time at Etihad Stadium, in addition to reaching the 2020-21 Champions League final.

The defender remains an important player for Pep Guardiola‘s side, making seven appearances this season, although he has not featured since the 1-1 draw with Aston Villa on September 3.

Walker’s existing deal with Man City is due to expire in June 2024, but according to the Daily Star, the English champions are not currently planning to open talks over a new contract.

The report claims that Walker’s age means that the Citizens are not currently in a rush to start contract talks, but there are likely to be discussions in the early stages of next year.

The Englishman is allegedly considering finishing his career at boyhood club Sheffield United, who are currently at the top of the Championship table after 10 matches.

Walker has been named in the Three Lions squad for their upcoming UEFA Nations League fixtures, and he is widely expected to be selected by head coach Gareth Southgate for the 2022 World Cup.

The defender is one of four right-backs in the current squad, with Kieran Trippier, Trent Alexander-Arnold and Reece James also selected for the games with Italy and Germany.

“Experience, knowledge of the game and actually me wanting to understand the game [better],” Walker told BBC Sport recently when questioned on how his game has developed under Guardiola.

“Some things you hear the gaffer saying here, you think, ‘Why is everyone not saying that?’ It can be something so simple where he wants a third man to set the ball.

“We always got told to be on the half turn – he hates it. You see the ball can run as you may see Kevin [de Bruyne] doing a lot of the time… where he lets the ball slide across him, but he [Guardiola] thinks that you should set it and play a third man because it’s quicker.”

Man City made it three straight wins in all competitions with a 3-0 success over Wolverhampton Wanderers in the Premier League on Saturday afternoon.

The Citizens are now not back in action until the Manchester derby on October 2, with Manchester United set to make the trip to Etihad Stadium.