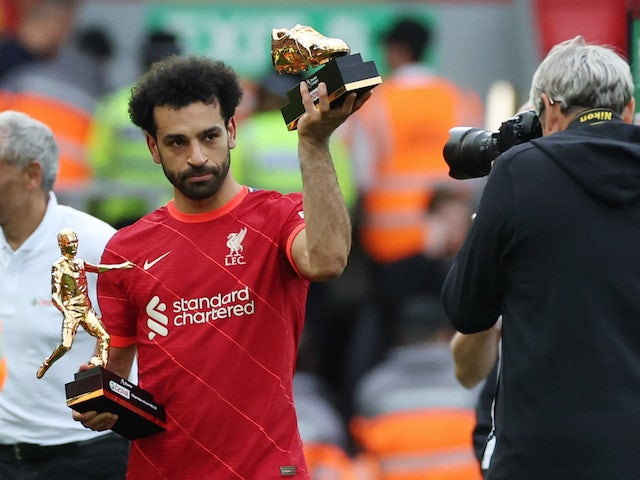 Ahead of the Champions League final between Liverpool and Real Madrid, the Sports Mole team discuss who is the better forward – Mohamed Salah or Federico Valverde.

Some of the world’s best players will be on show in Paris on Saturday as Liverpool and Real Madrid go head to head in the biggest club game in football – the Champions League final.

It is the third time the two famous clubs have met in a European Cup final – a record for a single fixture – with the past two split one apiece, Liverpool winning in Paris in 1981 before Real Madrid lifted the trophy in 2018.

Ahead of the blockbuster fixture between two of Europe’s most decorated teams, the Sports Mole team have compared every player likely to start the match for both sides in Paris.

Here, we discuss whether Liverpool’s Mohamed Salah or Real Madrid’s Federico Valverde is the better forward.

Federico Valverde’s importance to Real Madrid is ever-growing, but in a straight head to head with Mohamed Salah there is only one winner.

The Egyptian’s form has tailed off since the Africa Cup of Nations, but that is not to say by any means that he has been in poor form during the second half of the season, just that it has not lived up to the remarkable heights of the first half.

Even with that dip in form, Salah has still scored 31 goals and registered 16 assists in 50 outings for the Reds this term, picking up the Premier League’s Golden Boot and Playmaker Award in the process.

By contrast, Valverde has only chipped in with one goal and one assist in 45 appearances this season, and while he does boast better passing and defensive statistics, he is not particularly close to challenging Salah in any combined XI between the two sides.

Salah has made no secret of his desire to inflict revenge on Real Madrid after being injured in the first half of their 2018 final, and while some Madrid players have taken exception to that, whether they can actually stop him from fulfilling his vow remains to be seen.

Real Madrid will, arguably, fear Salah more than any other Liverpool player. The Reds have so much quality in the final third, but Salah is Lionel Messi-like in some of his actions, and he has the ability to destroy Ancelotti’s side on Saturday night.

A total of 31 goals and 16 assists this season, including eight goals and two assists in the Champions League, make him a serious danger to Real Madrid in this match.

Valverde, on the other hand, does not offer the same threat in terms of goals and assists, but the 23-year-old’s work-rate and ability to cover the ground makes him absolutely vital for Real Madrid.

The Uruguay international has been excellent in the Champions League this season and will be asked to perform an incredibly important role in this match, but Salah is the superior player.

Perhaps a slightly unfair individual battle given Rodrygo‘s recent heroic exploits in the Champions League, but even then, the Brazilian would be dwarfed by Salah’s contributions.

The effervescent Egyptian may have gone off the boil ever so slightly since his Africa Cup of Nations disappointment, but finishing the season as the Premier League’s joint-top goalscorer (23) and top assister (13) is nothing to be sniffed at, while he has also netted eight times in the Champions League.

Valverde’s energy and bite will always come in handy for Ancelotti either out wide or in the middle of the park, but there was no way the Uruguayan was going to edge out Salah here.

This is where I believe Liverpool have a decided edge as Salah is an elite finisher who is fundamentally as sharp and dynamic as any frontman in the world.

Valverde is excellent when playing his way out of trouble with a beautiful burst of speed that can get through opponents quickly. However, Salah has just as much pace and his agility, first touch and ball control, not to mention lethal finishing, are on a whole other level compared to Valverde.

Salah can do damage in so many ways, and he rarely misses when given an opportunity in front of goal. He has just as much flair and creativity, and he is hungry to beat Real Madrid after their defeat to them in the 2018 final.