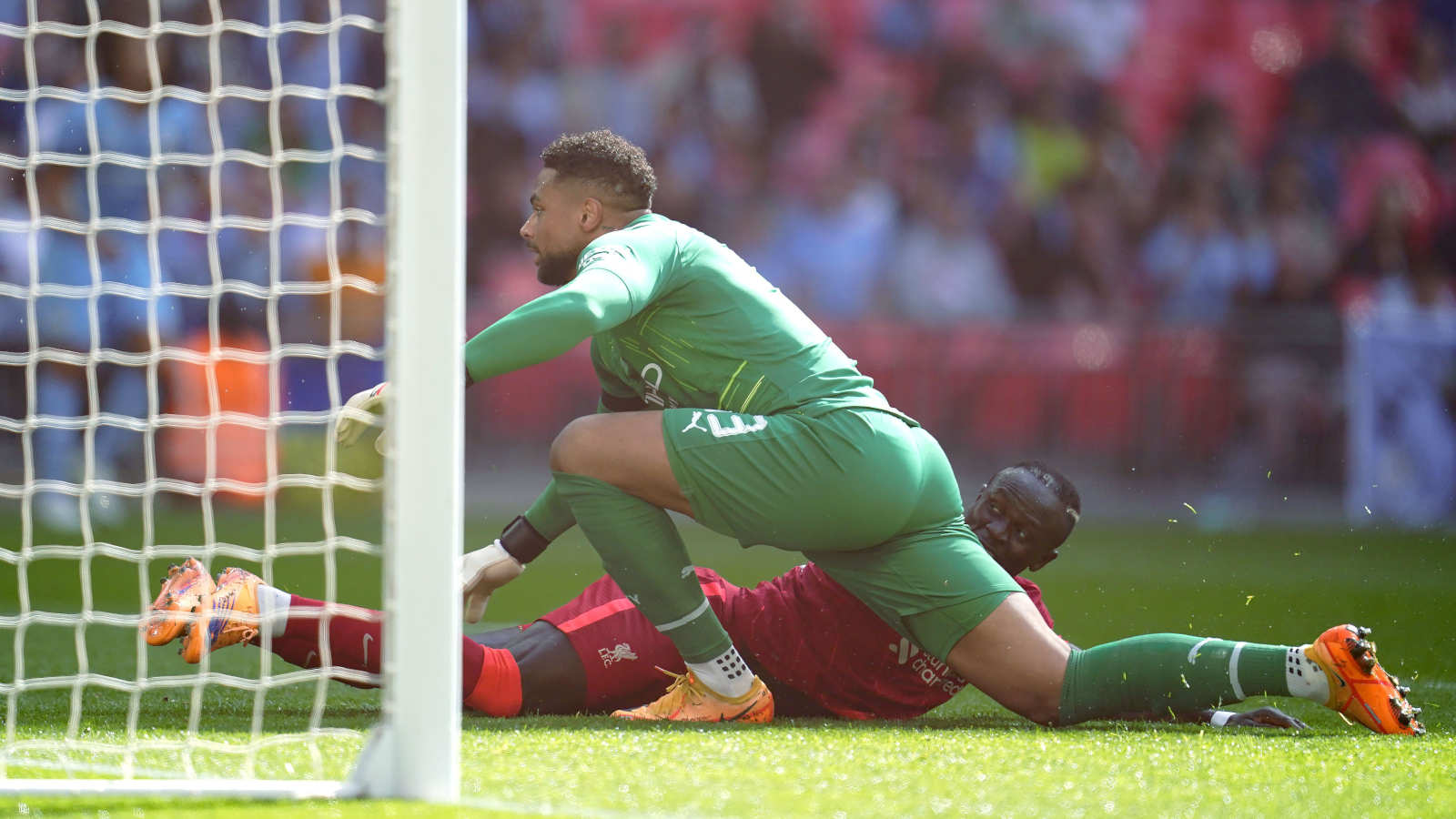 Liverpool will be returning to Wembley for the FA Cup final after Manchester City’s reshuffled defence let them down.

So Manchester City’s quest for the treble is over at the end of a disappointing afternoon at Wembley. (A section of) their supporters embarrassed themselves by disrupting a moment’s respect for the dead of Hillsborough before kick-off, while the team played as though they were still stiff from the cuts and bruises received during their Champions League match with Atletico Madrid. A gamble on shuffling the defence exploded in Pep Guardiola’s face and, while City supporters will argue that they’re still in the competitions that matter, it’s difficult to paint as a particularly positive day for the club in any way whatsoever.

Concerns about banks and banks of empty seats at Wembley Stadium for the FA Cup semi-final between Liverpool and Manchester City turned out to be somewhat overstated, with a reported attendance just shy of 74,000. The national stadium, which has been hosting cup semi-finals for a decade and a half as part of the Faustian pact required to get the damn thing built in the first place, was hosting two clubs from the north-west despite there being no direct trains into London from that part of England over Easter on account of engineering works. The people’s game, indeed.

But this game was a distinct contrast to the geometric display at the Etihad Stadium just six days earlier. It was an afternoon of slips and trips, of unforced errors and occasionally stodgy-looking attacks. Both teams look tired, as though the pressures of their consistent brilliance throughout the season are starting to come to bear. Within three minutes, City had half a chance when Joao Cancelo dragged the ball back for Jack Grealish, only for the forward to hesitate slightly and have his shot blocked.

Had that chance come ten minutes later, Grealish might well have buried it, but with less than three minutes on the clock, both Cancelo’s pass and Grealish’s reaction were a little sluggish.

Within 16 minutes, soft-centredness at the heart of Manchester City’s revised defence seemed to have put the game beyond them. A corner from right was met by Ibrahima Konate under a challenge of little to no significance from Nathan Ake and planted into the top corner. Six minutes later, a routine exercise in rolling the ball around the back ended in disaster when stand-in goalkeeper Zack Steffen took far too heavy a touch on a backpass and allowed Sadio Mane to steal in and stab the ball over the line from under his foot.

On the sidelines, Ederson, who’d got away with something very similar against the same opposition in their previous encounter, shook his head ruefully. The period between the two goals was played in a pink fog, after a smoke bomb was thrown onto the pitch behind the goal that the Liverpool supporters were occupying. At the other end of the pitch, a sloppy first half wore on; the best chance City had to quickly drag themselves back into the game came when Alisson almost had a backpass of his own charged down.

It was, on the whole, a scrappy half of unforced errors, but that wasn’t the talking point by half-time. Thiago and Trent Alexander-Arnold dinked the ball around tidily on the left hand side of the penalty area before stretching the ball across to Mane to drive a low shot just inside Steffen’s left-hand post. Liverpool, who’d started the game with an intensity that had been missing from some of their performance against City in the Premier League, left the field at half-time three goals to the good and cruising.

But 70 seconds into the second half, and presumably with their ears still ringing from the half-time roasting delivered by Pep Guardiola, City were back in the game when Grealish scored following a run on the right by Gabriel Jesus, after he sprang the offside trap. Under normal circumstances, a three-goal half-time lead is enough for us to consider a game to be effectively over. With Manchester City the normal rules don’t apply.

With the lead reduced to two and having been truly tested for the first time all afternoon, Liverpool started to look vulnerable. Five minutes later, Jesus got through again but had his shot blocked by Alisson. Liverpool supporters, now with the Steffen in the goal immediately front of them, amused themselves with derisive cheers every time the ball went anywhere near the goalkeeper.

Liverpool had enough about them to take the sting out of City’s immediate post-goal momentum (the high press, if anything, was more urgent in the second half than it had been in the first), though scoring so quickly did briefly breathe some life into a match which had felt somewhat moribund.

And with 20 minutes to play, two chances fell within two minutes of each other, either of which could have swung the match in a very different direction. Jesus broke through the right-hand channel but tried to place the ball past Alisson, and the Liverpool goalkeeper managed to get the block in. On this Easter weekend, resurrection proved a little beyond Jesus alone. And then, within two minutes at the other end, Salah was put in by a combination of a pass from Luis Diaz and a slip by Oleksandr Zinchenko, but could only hit the side netting.

As the match reached its final 15 minutes, it felt increasingly as though both teams had woken up to the importance of the occasion. Picking and choosing which trophies to win is for the second class. Genuine champions go all out for everything they can hoover up. But Liverpool continued to soak up City’s pace when they got into attacking positions while looking dangerous when they broke, and that feeling of jeopardy that should come naturally when Manchester City are chasing a two-goal deficit never really showed up until two seconds into the four minutes of stoppage-time, when Riyad Mahrez got to the touchline and pulled the ball across goal for Bernardo Silva to score from close range.

A match which might have been beyond doubt was suddenly now very much up for grabs. Manchester City poured forward, the whites of Liverpool eyes now clearly visible. Fernandinho and Mahrez had shots deflected away from goal within a minute. Roberto Firmino broke and Steffen blocked. But two goals in four minutes against the second-placed team in the Premier League, it turned out, was beyond even the reach of this Manchester City team.

It feels like a strange question to ask when one of the biggest global pulls in the game are in second place in the Premier League and chasing  four trophies, but do we still… underestimate Liverpool? Supernatural adjectives are sometimes applied to City’s football, but Liverpool are still on course for a Quadruple, something City can only achieve half of this season, and remain unbeaten against them this season. Both of these clubs will have far bigger games than this left, but Liverpool have just received a big psychological boost. The quadruple is still on.