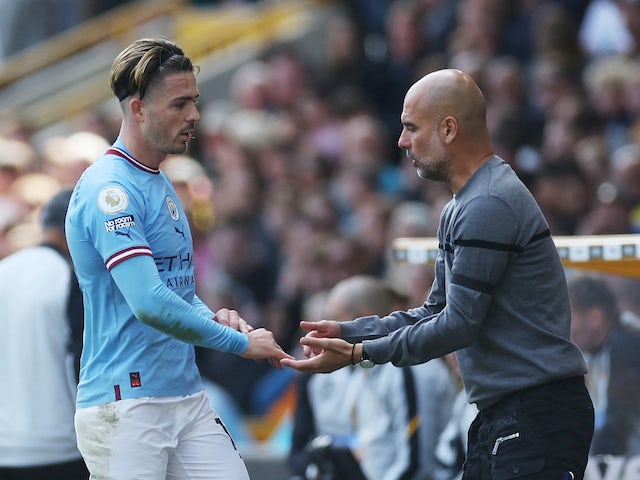 Jack Grealish thanks Manchester City boss Pep Guardiola for keeping the faith in him after scoring the opener in their 3-0 Premier League win at Wolverhampton Wanderers.

Manchester City attacker Jack Grealish has thanked manager Pep Guardiola for keeping the faith in him after he scored the opening goal in their 3-0 Premier League win away at 10-man Wolverhampton Wanderers on Saturday.

The 27-year-old has been questioned in recent weeks due to his lack of attacking output, but he answered his critics with his first goal of the season after just 55 seconds to open the scoring at Molineux.

A trademark low-driven cross whipped into the danger zone by Kevin De Bruyne was pounce upon by Grealish inside he six-yard box, who poked home to give City an early lead.

Erling Braut Haaland continued his electric start in front of goal with a right-footed strike in the 16th minute – the Norwegian has now become the first player in Premier League history to find the net in each of his first four away games in the competition.

After Nathan Collins was shown a straight red card for a high challenge on Grealish, Phil Foden capped off a comfortable victory for the Citizens – who have moved to the top of the Premier League table – when he flicked the ball home inside the area from another low cross from De Bruyne in the 69th minute.

Grealish, who was one of City’s standout performers at Molineux, has started in each of the last three matches since recovering from a knee injury, and the Englishman has thanks Guardiola for sticking with him in the first XI.

Speaking to mancity.com after the game on the praise he has received from Guardiola in the press, Grealish said: “It’s nice. He’s been great with me, I should thank him because he gave me the chance to play today after my performance on Wednesday (against Borussia Dortmund), which wasn’t the best.

“I enjoyed that. My goal was a long time coming. My last goal was against West Ham at the back end of last season. And we got a great result against a top team.”

Despite the criticism from others, Grealish accepts that he has not delivered in front of goal as he had hoped, following his £100m move from Aston Villa last summer, and he is keen to improve this aspect of his game.

“I should be scoring more and getting more assists,” Grealish added. “All I can do now is score and get assists (to silence the critics).

“I will always have people talking about me because of the amount I got bought for but if you look throughout my career, I haven’t scored loads. It’s something I want to add to my game and hopefully with this team and in front of these fans I can.”

On scoring his first goal of the season, Grealish said: “I didn’t actually realise it was only 55 seconds until someone just told me. I thought it was about five minutes! It must be the quickest I’ve ever scored.

“My dad says it to me every single day, ‘try and get in, Jack, for the little tap-ins’. So my dad will be buzzing I got a little goal like that.

“For me, it’s nice to get off the mark for the season. But to get three points here is great because this team [Wolves] is underrated.”

Grealish will now link up with Gareth Southgate‘s England squad for two UEFA Nations League fixtures against Italy and Germany later this month.