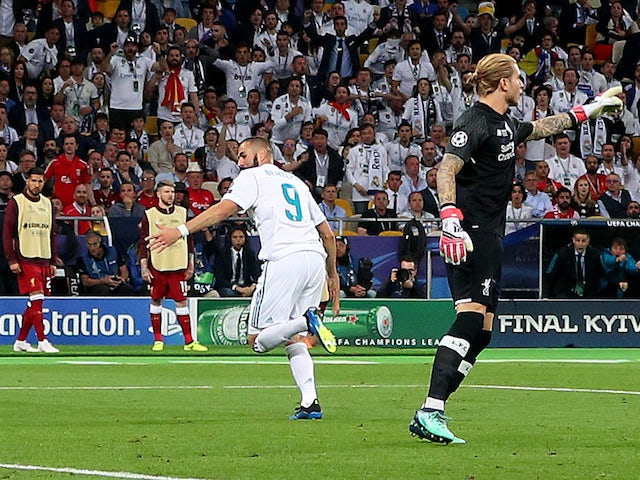 Sports Mole looks at the five most memorable goals between Liverpool and Real Madrid ahead of Saturday’s Champions League final.

Guaranteed to leave the Stade de France with a whopping 20 European crowns between them, Liverpool and Real Madrid are putting the final touches on their preparations for the 2021-22 Champions League final on Saturday evening.

While the Reds are aiming to become continental champions for the seventh time, Los Blancos have already scooped Europe’s top honour on 13 occasions and have fond memories of the 2018 final versus Jurgen Klopp‘s side.

A plethora of memorable goals were scored on that fateful night in Kyiv – one of eight previous meetings between Liverpool and Real Madrid – and plenty of tasty strikes have been served up in this fixture down the years.

Here, Sports Mole picks out the five most memorable goals between Liverpool and Real Madrid ahead of Saturday’s behemoth of an encounter.

For 51 minutes of the 2017-18 Champions League final, Loris Karius performed admirably. The German goalkeeper did well to keep out Cristiano Ronaldo‘s goal-bound header – from an offside position of course, but he did not know that.

However, Karius would have welcomed the ground swallowing him up early in the second period, as the shot-stopper calmly collected an overhit pass from Toni Kroos and seemingly only had the simple task of rolling the ball out to a teammate.

Karim Benzema, though, was still in the vicinity, and as any seasoned centre-forward should do, he anticipated the goalkeeper’s next move, stuck out a leg and wheeled away in celebration even before the ball had trickled over the line.

While it would later be revealed that Karius played on with a concussion following a collision with Sergio Ramos, it did not mask the German’s utter embarrassment at the time, and that horror show will most likely prove to be his last-ever appearance in the red jersey.

A battle between Real Madrid and Liverpool in Madrid warrants the bright lights of the Bernabeu rather than a behind-closed-doors encounter at the Estadio Alfredo Di Stefano, but there was no shortage of quality on the pitch.

Vinicius Junior is undoubtedly demonstrating every ounce of his potential in 2021-22 after a slightly underwhelming period in the Spanish capital, but Liverpool were certainly aware of his qualities after the first leg of their 2020-21 quarter-final.

It took only 27 minutes for Real Madrid to find their way through the makeshift Liverpool backline, and it was no surprise to witness Toni Kroos instigating the move with a delightful long ball through to the speedy Vinicius.

The Brazilian starlet got in between Trent Alexander-Arnold and Nat Phillips, chested Kroos’s pinpoint pass down expertly and fired home into the bottom corner beyond Alisson Becker for the first of his two goals on the night – helping Real to a 3-1 success before they completed the job at Anfield.

Prior to the first leg of Liverpool’s Champions League last-16 battle with Real Madrid at the Bernabeu in 2008-09, Arsenal were the only previous English side to have beaten Los Blancos on their own turf in a competitive fixture.

The Reds were thankful for the offside flag when Gonzalo Higuain turned in from close range during the opening exchanges, while Iker Casillas and Pepe Reina were both kept extremely busy during the highly entertaining battle.

With the game seemingly heading for a goalless draw, Fabio Aurelio stood over a Liverpool free kick from the right-hand side in the 83rd minute after Gabriel Heinze had inexplicably bundled Dirk Kuyt over.

The Brazilian’s left-footed delivery was right on the money, with Yossi Benayoun rising highest to power a header past Casillas, who was not helped by the Blancos defence simply standing still during the Israel star’s ascent.

There was to be no way back for the Madrid giants on their own turf, and the Bernabeu success galvanised Rafael Benitez‘s side for the return leg – a straightforward 4-0 Anfield thumping.

It is only fitting to witness Liverpool and Real Madrid reconvene in the French capital 41 years on from their inaugural meeting in European competition, which coincidentally saw both sides battling for the crown in the 1980-81 European Cup final.

Some may have expected Kenny Dalglish to score the goal which would propel Bob Paisley‘s side to a third continental title. Others had the likes of Juanito and Santillana down to make the net ripple for those in white. But in the end, the tie was settled by the Kennedys.

Eighty-two minutes had passed before Ray Kennedy picked out Alan Kennedy’s run from a throw-in, and the left-back opted to do it all himself – weaving his way into the box through a sea of Real defenders.

Kennedy was grateful to see Rafael García Cortes swing and miss as he attempted a clearance, and the Liverpool man went on to rifle an effort into the net from a tight angle to win the coveted prize for Liverpool.

Of course, Klopp boasts a rather talented left-back of his own these days in Andy Robertson, and the Scotland international would dearly love to follow in the footsteps of his predecessor in a game where revenge is on the minds of several Liverpool players.

When one thinks of some of the finest-ever goals to have been scored in a Champions League final, many will cite Zinedine Zidane‘s volley of 2002, Sergio Ramos’s 92:48 moment in 2014 or Mario Mandzukic‘s Puskas nomination-worthy overhead kick in the 2016-17 final.

Real Madrid is the common theme with all of these efforts – with Mandzukic briefly restoring parity for Juventus against Los Blancos five years ago – but Gareth Bale elevated that level in Kyiv.

While Karius was certainly at fault for Benzema’s opener, there was nothing he nor any goalkeeper could have done about Bale’s wonder strike barely two minutes after his introduction.

Just after the hour mark, legendary left-back Marcelo picked the ball up on the flank from Casemiro‘s pass before cutting inside and delivering a right-footed cross that left a lot to be desired.

However, Bale was not giving it up, as the Welsh wizard spectacularly connected with a left-footed bicycle kick which flew into the back of the net – sparking wild Real celebrations and leaving those in red shell-shocked.

A second from range would follow for Bale in the dying embers – seeping through the gloves of the devastated Karius – and while his time at the Bernabeu has not been all sunshine and rainbows, Real fans would be foolish to overlook his world-class contribution to their 13th and most recent Champions League crown.