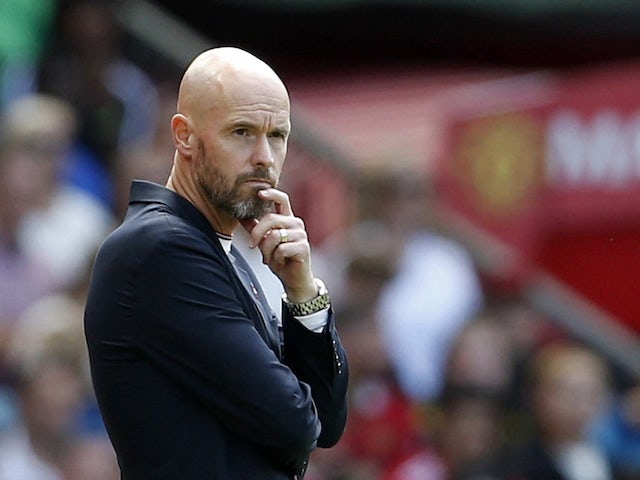 Manchester United boss Erik ten Hag targets five new players before the end of the summer transfer window, according to a report.

Manchester United boss Erik ten Hag is reportedly determined to bring five new players to the club before the end of the summer transfer window.

The 20-time English champions have only made three additions in the current market, bringing in Tyrell Malacia, Christian Eriksen and Lisandro Martinez, despite the fact that a number of players have left this summer.

A senior group of Man United players, including Cristiano Ronaldo and Harry Maguire, are believed to have recently met with the club’s board to urge them to make more signings before the end of the window.

According to 90min, Red Devils boss Ten Hag wants another five signings over the next couple of weeks, with the Dutchman starting his reign with back-to-back losses to Brighton & Hove Albion and Brentford.

The report claims that the former Ajax head coach wants a right-back, two midfielders, a centre-forward and a wide forward to arrive at Old Trafford before the deadline.

There has recently been speculation surrounding the futures of Diogo Dalot and Aaron Wan-Bissaka, with Barcelona linked with the duo, and a departure for either would lead to the Red Devils entering the market for a new right-back, with the Catalan club’s United States international Sergino Dest thought to be a target.

Man United have been linked with Frenkie de Jong since the end of May, but the club are now seemingly willing to give up on their pursuit of the Barcelona midfielder.

A deal for Juventus‘ Adrien Rabiot is now also reportedly off due to the Frenchman’s wage demands, with Real Madrid‘s Casemiro emerging as an alternative.

The 20-time English champions are also expected to move for a new centre-forward, with Ronaldo potentially being allowed to depart before the end of the window.

Man United have also been chasing a wide forward this summer, and a recent report claimed that the club had not given up on a deal for Antony despite cooling their interest in the Ajax attacker.

The Red Devils are said to be prepared to wait until the last moment to make another bid for the Brazil international, who addressed his future after contributing a goal and an assist in Ajax’s 6-1 victory over Groningen in the Eredivisie on Sunday.

“No idea (if Ten Hag will call him over a move)… he has to discuss this with my agents, I am focused on here. What will come will come, we will see. At the moment I feel good here,” Antony told NOS.

“Like I said, I feel good here. I love this country. I give everything for this club, every minute, every second. And when I don’t play I like to enjoy the beach and city. I am loving this city and this club.”

Antony has provided one goal and two assists in two league appearances for Ajax at the start of the new campaign, while he scored 12 goals and registered 10 assists in 33 appearances in all competitions for the Dutch champions during the 2021-22 campaign.