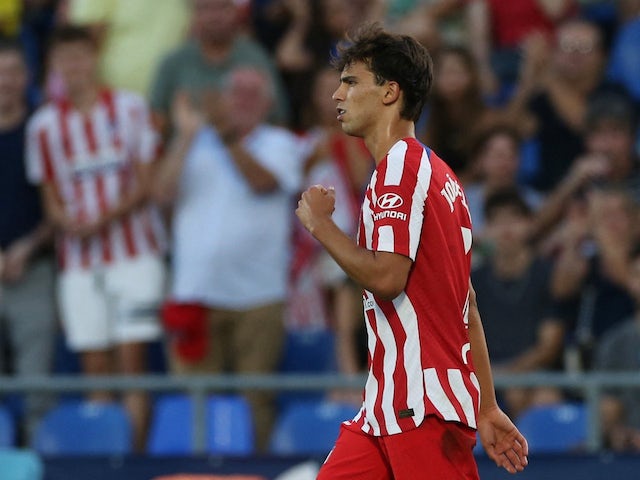 The Red Devils are looking to bolster their attacking options before the transfer window closes irrespective of the uncertainty over the future of Cristiano Ronaldo.

Felix has recently emerged as a potential target, with one report claiming that United representatives held talks with Atletico in the Spanish capital on Tuesday.

According to Spanish news outlet AS, Felix has been the subject of a €130m (£110m) offer from United, but it was quickly rejected by Atletico.

The La Liga club have no interest in selling the 22-year-old this summer and have pointed to the forward’s mouth-watering €350m (£295.7m) release clause.

The report adds that the Portugal international is regarded as one of Atletico’s most important players by both his teammates and head coach Diego Simeone.

Atletico have since taken to Twitter to post an image of the forward training along with the caption “Priceless”.

Since joining from Benfica for a club-record £114m in the summer of 2019, Felix has scored 29 goals and provided 18 assists in 112 appearances for Atletico across all competitions.

The forward is yet to reach the heights expected, however, and was reduced to only 13 La Liga starts last season due to injury.

Felix, who scored the only goal in Atletico’s 1-0 pre-season win over Man United last month, is now keen to justify his price tag and is determined to improve with Los Colchoneros.

Speaking to AS, Felix said: “I’m happy, I’m working to help the team, give joy to the club and all the people of Atleti. The other years I always tried to be better. If this is my year, I don’t know. It depends, we don’t know about the future.

“But what I can assure you is that I am doing my best to be at the best level so that I can help the team and the club.

“I arrived here young, I’m still young but I’ve already grown a lot and I’m sure to grow more. And I’m fine. I’m happy. I have a calm head and when so, things go naturally and let’s hope things are good.

“With [Antoine] Griezmann, with Alvaro [Morata], with [Matheus] Cunha, with Angel [Correa]. We all get along well and on the field, the team is doing great.”

Felix, who has four years remaining on his contract at the Wanda Metropolitano, was a standout performer in Atletico’s opening La Liga match of the new season, provided three assists in their 3-0 away victory against Getafe on Monday.

Meanwhile, Felix’s teammate Matheus Cunha is understood to have turned down the chance to sign for United this summer, with the 23-year-old settled in Madrid having only joined the club last summer from Hertha Berlin.

Man United are now running out of time to strengthen their squad before the September 1 deadline, with Erik ten Hag hoping to recruit at least five more players having already signed Tyrell Malacia, Christian Eriksen and Lisandro Martinez.